Few things are more frustrating than a poor Wi-Fi signal when you’re trying to watch Netflix, check your email or chat with your colleagues on Slack, especially all at once. With a weak signal, messages and emails won’t load, movies pause to buffer and we get increasingly annoyed at the slowdown. Whether you’re streaming, gaming or simply browsing, you may be wondering: What is a good Wi-Fi signal strength?

What is Wi-Fi signal strength?

Wi-Fi signal strength is what it sounds like: how strong the signal is between your router and the device you’re using. A stronger signal equals a more reliable Wi-Fi connection. Signal strength is generally expressed in decibels relative to a milliwatt, or dBm, and ranges from -30 (strong) to -100 (weak).

Note that Wi-Fi signal strength is not the same as your connection speed, which is measured in megabits per second (Mbps). You could have a strong signal, but if your internet plan allows you only 5 Mbps, you probably won’t be able to stream HD video that requires speeds closer to 100 Mbps.

What is a good Wi-Fi signal strength?

A good Wi-Fi signal strength depends on what you’re using your connection for, but in general, -70 dBm is about as low as you want to go for basic web browsing or email searching. As a reminder, -30 dBm is the maximum strength, while -100 dBM is essentially useless. 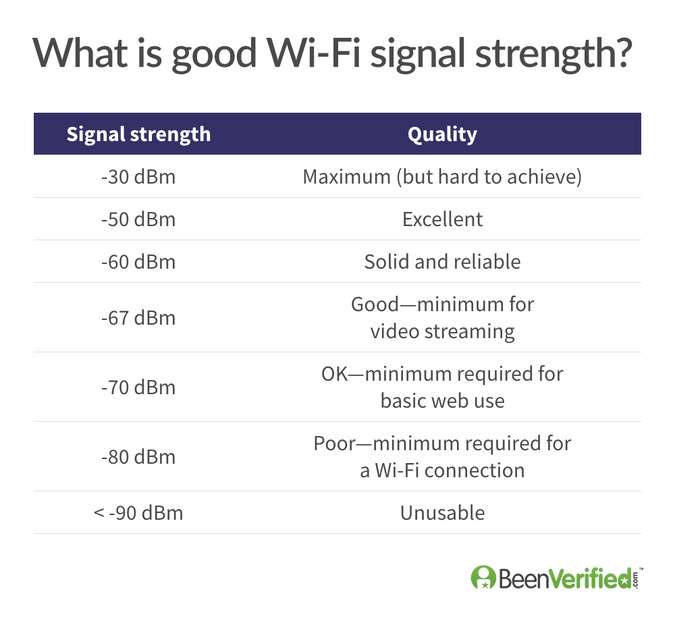 How to check and measure Wi-Fi signal strength

If you think your Wi-Fi signal isn’t quite up to snuff, you can check the strength on any Wi-Fi-enabled device. The simplest method is to look at the Wi-Fi indicator, a series of curved lines generally found on a toolbar at the top or bottom of your screen. If one or more of the bars aren’t lit up, your signal isn’t as strong as it could be. Consider walking around your space and into different rooms away from your router to quickly test any weak spots.

If you want to actually measure your Wi-Fi signal strength to compare to the chart above, you can do so using a few additional steps. You’re looking for a metric called received signal strength indicator, or RSSI, measured in dBm.

On a Mac, press and hold the Option key as you click on the Wi-Fi indicator in the menu bar. This will pull up additional data about the network to which you’re connected. On Windows, you’ll need a third-party app, such as the free program inSSIDer, because there’s no built-in utility for checking signal strength. 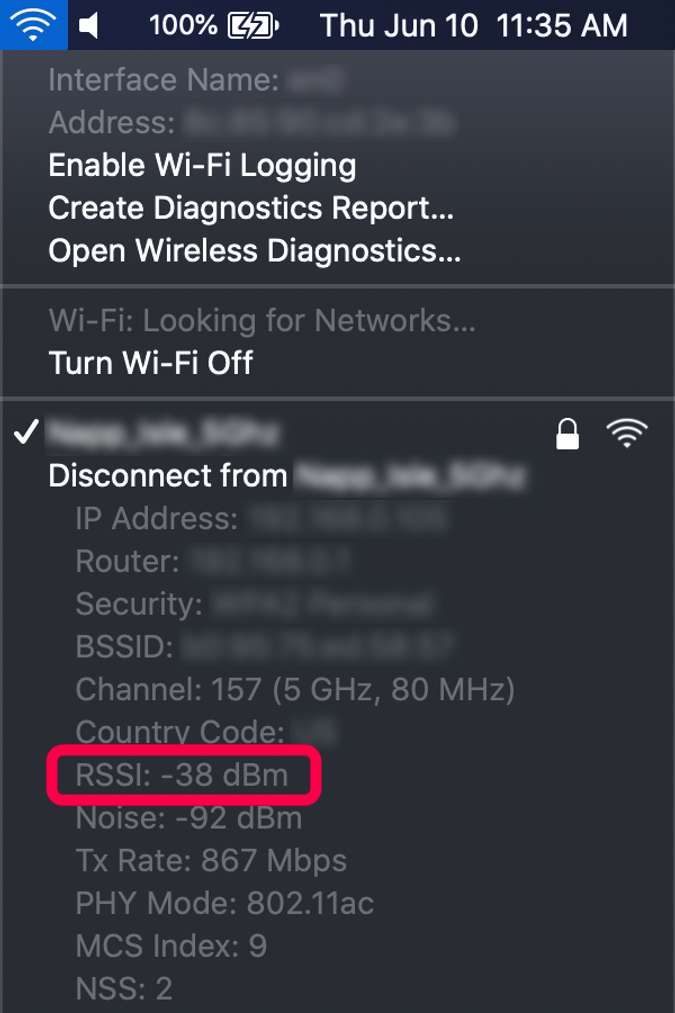 For mobile devices, you’ll need to download separate apps, such as Airport Utility for iOS and Wi-Fi Analyzer for Android, to measure Wi-Fi signal strength.

If you determine your Wi-Fi signal isn’t as good as it could be, there are a few things you can do to make it better.

The simplest way to improve your Wi-Fi signal strength is to move closer to your router. The farther away you are—and the more interference there is between your device and your router—the worse your signal is likely to be. For example, if you’re in another room with thick walls in the way, your signal is going to be dampened. Move your router closer to where you need a stronger signal, ideally mounted closer to the ceiling than the floor.

If you’re right next to your router but still have a weak signal, your router may need an upgrade. Newer devices that support both 2.4 GHz and 5 GHz signals will get you the best coverage throughout your home. But there are a few additional troubleshooting options, such as rebooting your router and checking your Wi-Fi network connection, to try before you give up.

“The problem is that there are too many interfering Wi-Fi devices,” Jones said.

For example, your microwave will affect Wi-Fi speeds when running, an especially difficult problem if you live in an apartment in close proximity to your neighbors. That’s why routers have different frequencies (2.4 GHz and 5 GHz, as described above) to help minimize interference.

“The only way to avoid this,” Jones said, “is to be closer to the Wi-Fi router.”