Where the 'Karens' Are: California, New York Top States for Viral Incidents

If you’ve seen a “Karen” incident that’s gone viral, there’s about a 1-in-4 chance the episode happened in either California or New York, a BeenVerified study finds.

“Central Park Karen” is perhaps the most infamous of these meme-making conflicts, where a white woman is shown in May calling the police on a Black man bird-watching in New York City’s Central Park after he asked her to leash her dog.

Indeed, more than 1 in 10 “Karen” confrontations happen in public parks or other outdoor recreation areas, according to our examination of dozens of similar incidents across 33 states and the District of Columbia. Still, stores (20%), neighborhoods (19%) and public streets (13%) are the most common locations where these filmed conflicts occur.

BeenVerified analyzed 150 incidents over the past 2 ½ years in which white people were caught on video calling police or security on people of color for seemingly trumped-up crimes. The purpose of the analysis was to determine which states and environments these incidents are most likely to occur.

While the “Karen” meme recently morphed to describe filmed COVID-19-related outbursts regarding use of masks, we limited our analysis to episodes like “Central Park Karen” (and predecessors “BBQ Becky,” “Permit Patty” and others) where white people made false or unwarranted calls to authorities, typically against Black victims.

Some of our top findings:

“Karen” emerged as a popular nickname for an entitled, hostile middle-aged white woman, an aggressive busybody with 911 on speed dial for imaginary infractions—usually against a Black person just going about their day. But before “Karen” came into the lexicon, there were “Permit Patty,” “Barbecue Becky,” “Golfcart Gail” and other memes that often bubbled up from the hashtag “living while black” and other related variants (“birding while black,” “banking while black,” “campaigning while black”).

For the purpose of this study, we focused on verified news reports since 2018, where raw footage was first uploaded to Facebook, Twitter or other social media platforms, and then subsequent articles written about the videos ricocheted across the social and mainstream media landscape. 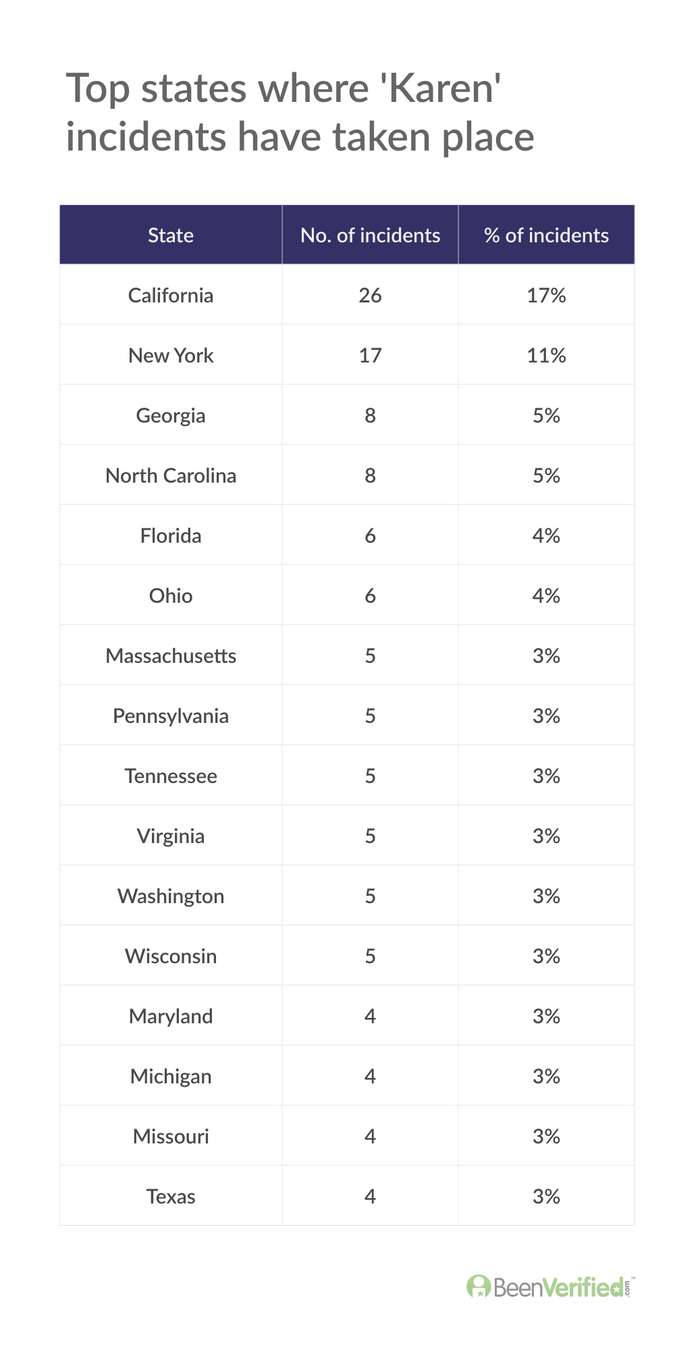 Our analysis shows that “Central Park Karen” is emblematic of where the “Karens” are: California (17%) and New York (11%) are, by far, home to the largest percentage of these types of viral events. Taken together, more than 1 in 4 incidents we analyzed happened in these states.

Other states that had five or more of these incidents since 2018 include: Georgia and North Carolina (5% each); Florida and Ohio (4% each); and Massachusetts, Pennsylvania, Tennessee, Virginia, Washington and Wisconsin (3% each).

Why are California and New York such “Karen” hotbeds? Population is one factor, but not the whole story—otherwise, we would expect Texas and Florida to have higher percentages. “Because California and New York are also both the media capitals of the nation—and perhaps home to more social media influencers—it could be incidents in these states have an outsized chance of being picked up and widely reported,” said Richard Gargan, spokesman for BeenVerified.

Both states also are taking the lead in criminalizing this behavior. State lawmakers in New York passed new legislation in June against false race-based 911 calls, and lawmakers in California have recently proposed similar legislation against this type of “white caller crime”—but our analysis shows that arrests in these incidents are rare. Out of 150 incidents, there were only six related arrests.

Our analysis of these fake threats finds there are 10 broad categories where racist “Karen” viral incidents are most likely to occur:

“The common thread through all these incidents are people making false assumptions based on race, or taking advantage of those assumptions to make false claims to authorities,” said Gargan of BeenVerified. 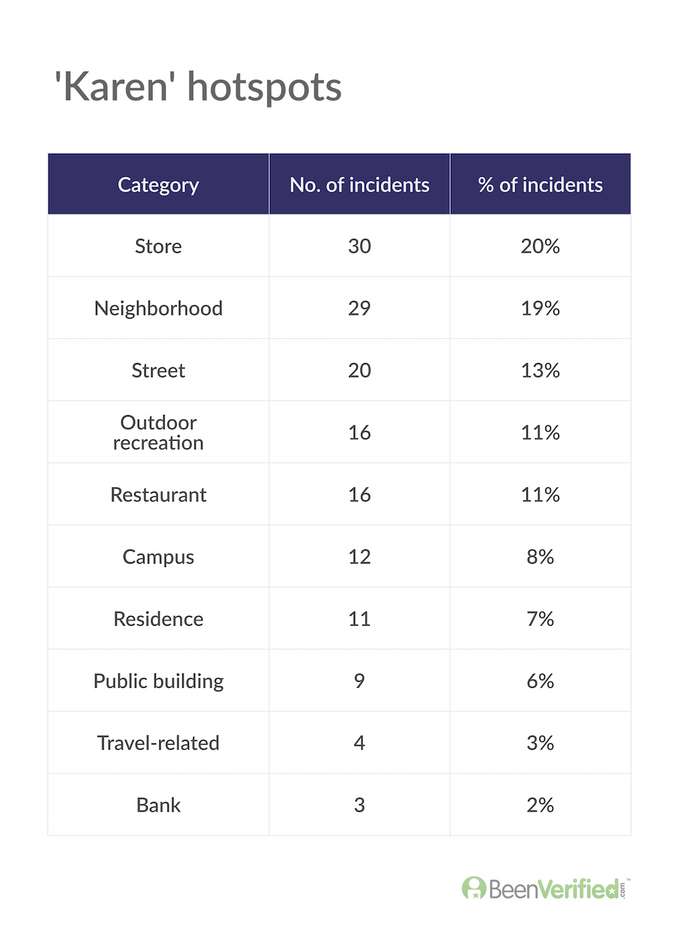 All namesake Karens are right to feel they are being unfairly singled out—our examination of these incidents showed none of the perpetrators in these occurrences were actually named Karen (or Ken, Chad, Gail, Paula or Patty). But all the recent memes map to names that reached their height of popularity with the post-war baby boomer generation and early Generation X—people who indeed now are more likely to be middle-aged, as the stereotype suggests.

BeenVerified analyzed Social Security Administration records for all 50 states and Washington, D.C., going back to 1910 to look at the rise and fall of Karen as a popular baby name.

Some other Karen name facts: 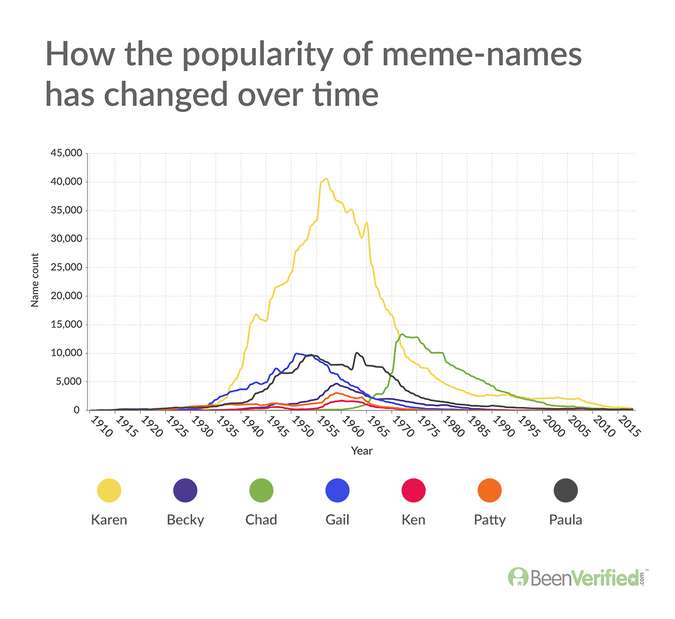 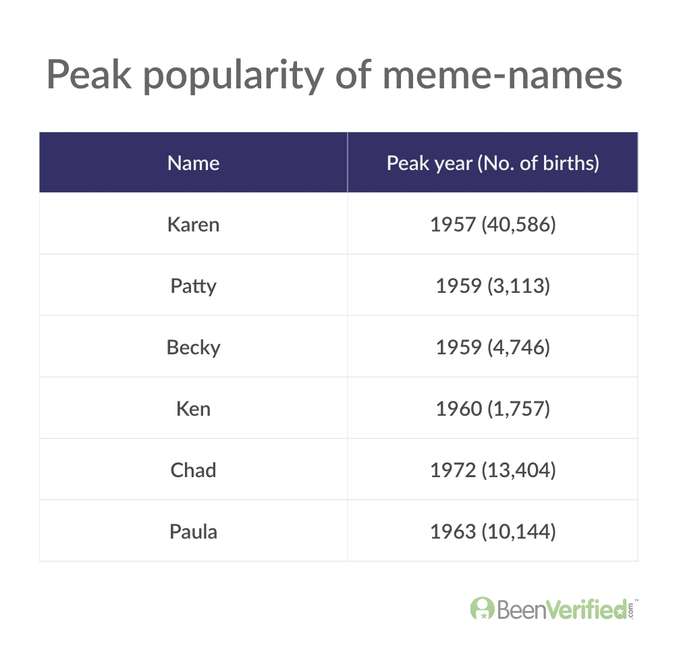 BeenVerified combed through hundreds of press reports and social media incidents from January 2018 through July 24, 2020. The incidents were examined for the city, state and type of place where the altercations occurred. We filtered out all meme-making incidents that weren’t related to false or unwarranted 911 calls or reports to private security staff.

For name trends, BeenVerified analyzed 311 million birth records from the Social Security Administration from 1910 to 2018, the last year for which records are available.

BeenVerified’s mission is to help people discover, understand and use public data in their everyday lives through a number of services, including a people names search tool. BeenVerified curates dozens of public data sources and proprietary data sets to give people easy and affordable access to billions of public records.