As states consider rolling back openings as coronavirus cases surge across the country, many U.S. colleges and universities have made last-minute changes on whether they will meet in person, online, or through a combination of distance learning and on-campus education.

BeenVerified analyzed data from more than 1,200 private and public four-year universities across the country, examined several top universities to see how plans for fall education are firming up, and looked into whether tuition freezes or reductions are on offer.

Our results show that less than half of universities plan for students to be on-campus this fall—but most private universities still plan to offer a return to campus in the fall. Yet most top-rated academic universities are planning online learning or a hybrid model of in-person and distance learning.

Despite the economic upheaval in the aftermath of the pandemic, most top schools have no plans to freeze or reduce tuition in the fall—except for historically Black colleges.

“With the rising tide of coronavirus cases and lack of consensus on the best way to open universities, students are facing a stressful—and in many cases, uncertain—start to the academic year,” said Michael Pugh, a data analyst for BeenVerified. “That’s especially true for families with children attending different schools in the fall.”

Our study uses data from private and state four-year universities across the nation collected by The Chronicle of Higher Education, as well as a look at top academic schools as determined by 2020 U.S. News & World Report college rankings, and the 10 most profitable football programs, according to Forbes magazine. (See methodology for more information.)

“Private schools—many of which were in difficult financial straits even before the pandemic hit—are likely feeling more pressure to provide an ‘on-campus experience’ to justify their higher tuition,” Pugh said. “Public universities have taxpayer money to draw on and need to take fewer risks to survive the pandemic.” Top states that plan to be on-campus vs. online

As our results show, there is a wide variety of approaches planned for the fall depending on the state. Wyoming and South Dakota are the only states where all of the local universities in our data set plan to be on-campus in the fall, followed by Mississippi and North Dakota.

On the other hand, Alaska, Delaware, New Mexico and Nevada are states in which none of the local colleges plan to offer on-campus learning for the fall.

Online-only approaches to the new academic year are much less common. Delaware and California are the two states where a majority of universities plan to offer only distance learning this fall, followed by New Mexico (43%), Alaska (33%) and Washington (28%).

“With the recent surge of coronavirus cases in California, the move to online learning makes sense—yet states that have experienced similar surges, such as Texas and Florida, are not following suit,” Pugh said. Most top-ranked universities plan to offer a hybrid or online-only approach. While a number of schools with high revenue-generating football programs have reverse course on plans to fully return in-person, 30% still plan a traditional return to campus in the fall. “With the cash at stake with these programs, the pressure is enormous to come back to campus this fall,” Pugh said. “Still, there are lingering doubts what shape the fall college football season will take this year.” 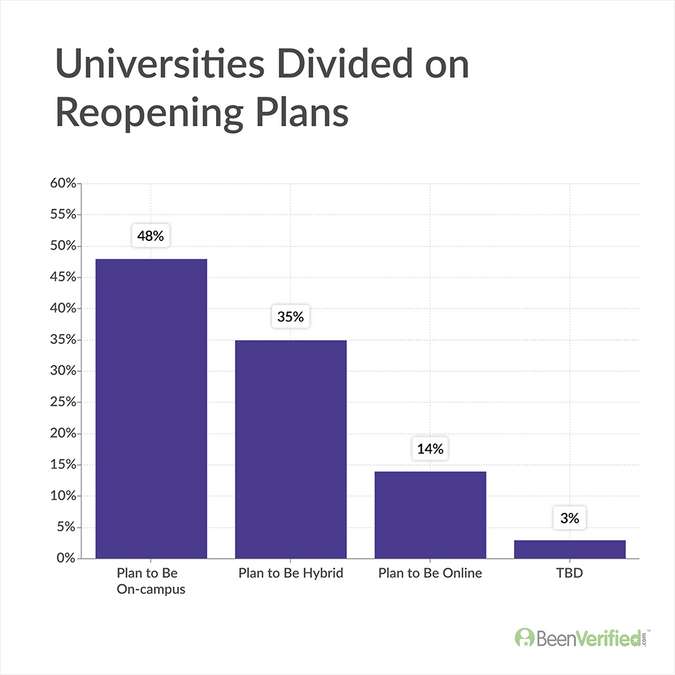 Looking only at tuition and fees (not room and board), most top schools plan to maintain annual tuition increases for the 2020–2021 academic year.

“With the convergence of the economic crisis with the coronavirus, the fact that most top universities don’t plan to freeze or discount tuition will undoubtedly be a concern for some families,” Pugh said. “On the other hand, preparing for both on-campus and distance learning in some ways doubles the work for college staff and faculty.” BeenVerified used data collected by The Chronicle of Higher Education to compare the current status of 1,269 schools and universities. Data was downloaded July 31, 2020. To choose top universities to examine, we used the 2020 U.S. News & World Report list of top schools in each category. For our examination of universities with top football programs, we used Forbes magazine’s 2019 list of College Football’s Most Valuable Teams.

BeenVerified’s mission is to help people discover, understand and use public data in their everyday lives through a number of services, including a company search tool. BeenVerified curates dozens of public data sources and proprietary data sets to give people easy and affordable access to billions of public records.