How to Outsmart a Romance Scammer

With just a few swipes, the internet can give you access to a limitless dating pool. While being swept off their feet, some become victims, unwittingly swindled out of money.

In 2020 alone, online dating scams cost Americans a record $304 million—up about 50% from 2019, the Federal Trade Commission (FTC) reported. The isolation during the pandemic and the increasing popularity of online dating sites and apps are to blame for the rise, the FTC reports.

Besides the financial damage, there are emotions victims must contend with—shame, embarrassment and even depression—in the aftermath of being duped. Here’s how to outsmart a romance scammer.

Romance scams—also called online dating scams or love scams—start with a fraudster striking up a conversation and subsequent relationship with an unsuspecting person. While victims of romance scams tend to be middle-aged or older, anyone can be susceptible to fraud.

The pandemic has been perfect breeding grounds for romance scammers, as it limited the ability of Americans to meet would-be lovers in person.

The intent behind the relationship is to form an emotional bond with the victim so that person is willing to perform favors. Victims may be asked to send money for hotel stays, medical bills, travel documents or airfare, but in reality, the con artist uses the cash for personal gain. 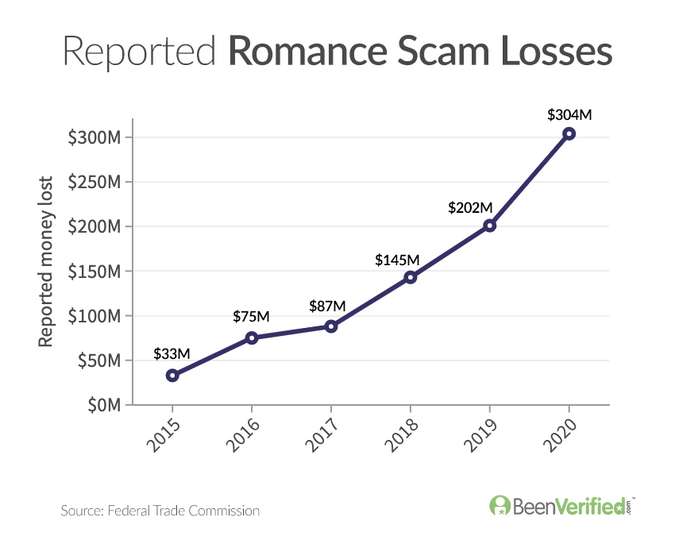 In 2020, the median reported loss per victim from romance scams was $2,500. And people 70 and older reported the highest individual median losses at $9,476, the FTC says. Nearly 33,000 Americans were bilked of cash in romance scams last year, nearly triple the reports from 2016.

How to outsmart a romance scammer

Unfortunately, protection against romance scammers largely lies with you: Rarely are these online Casanovas caught or prosecuted.

“Most of the people doing this are not in the United States,” said Steve Baker, an international investigations specialist with the Better Business Bureau (BBB) and author of the study “How Scammers Use Impersonation, Blackmail, and Trickery to Steal from Unsuspecting Daters.”

“First you have to find the person, then you have extradite them to do time—and it doesn’t happen very often.”

To guard yourself against these dating site scams, know the signs to look for and consider these tips and precautions:

Wayne May, founder of the online education and support group ScamSurvivors, said the type of romance scam often provides clues about the location of the scammer. For example, scammers from Russia and the Ukraine have been known to ask for money to pay for airline tickets or visa applications. Meanwhile, con artists from Nigeria often pose as businessmen and CEOs, and even set up fake banks or shipping companies to swindle victims out of money, according to May.

While the tactics may differ, there are several dating scam formats that follow a well-worn criminal playbook. “[Scammers] are profiling you without you even realizing it,” said Kari-Anne Liebling, a romance scam survivor who works alongside May at ScamSurvivors. Scammers do their homework over days, weeks or even months to figure out what type of scam you’ll respond to. These are among the popular schemes to look out for:

Scammers pose as service members stationed abroad. After forming a relationship with their target, the scammer asks for funds to take care of expenses, such as travel, medical care or other needs. Liebling, who lives in Austria, thought she fell in love with an American soldier fighting in Iraq—until he began asking her for money to pay for his son’s medical bills. She traced his email address back to Ghana. And Liebling isn’t alone. The U.S. Army Criminal Investigation Command (CID) receives hundreds of complaints a month from people who’ve been duped by scammers posing as U.S. soldiers.

Romances that start on social media, dating or gaming sites may begin innocently enough, with two people “meeting” online, but a scammer may pose as a lovelorn widower or someone who is in a vulnerable position. They work to gain your trust and sympathy so they can start asking for money and other favors. Watch out for unsavory actors who claim they’ve been robbed or have fallen ill. Victims report being asked to send hundreds or thousands of dollars to “help” individuals who need money after a robbery or a hospital stay.

Someone running an international romance scam may also meet you on a social media or dating site, but their underlying strategy is claiming to be a successful entrepreneur. These international men (and women) of mystery use work and business meetings as excuses for never being able to meet you in person, but that won’t stop them from asking you for money to invest in their “business” once you’ve developed a relationship.

Internet dating scam victims may also become money mules if they deposit fraudulent funds or deliver packages containing drugs for their scammer. One female victim interviewed by the FBI met a man on a dating site. He tried to wire her $250,000, which he then asked her to transfer to other accounts. The practice of transferring money through multiple channels can be used by criminals to conceal their identity while moving cash around the world.

In a sextortion scam, someone will use sexual images or videos that you have shared with them for blackmail. The scammer may threaten to send pictures to loved ones or to your employer unless you send money or perform other sexual acts against your will.

How to recognize online dating scams

Someone who uses professional-looking modeling photos on their free dating site profile should set off an alarm right from the get-go, said May. If you’ve already been swept up in a whirlwind online romance and have a feeling that things are just too good to be true, they might just be. Here are red flags that someone might be trying to scam you:

What to do if you’ve been scammed

If you suspect you may have been scammed, “Stop talking to them right away and don’t confront them,” said May. When confronted, con artists can come up with what seem like valid excuses, which makes it harder to untangle from their web of lies. There are also some immediate steps experts recommend you take:

Online dating scams can be both financially and emotionally devastating. To avoid falling victim to one, it never hurts to guard your heart—and your bank account—from people you haven’t ever met in real life.

How to Spot a Con Artist

How to Spot a Con Artist

What Is Ghosting and How to Tell You’re Being Ghosted

30 Common Signs He’s Cheating on You