8 Ways to Tell if an Email Is Fake

We all get them: Emails that slip through the spam filter and find their way to our inboxes. You find yourself wondering, how do I know if an email is fake? What are some telltale signs? The good news is that there are a few ways that may help you quickly figure that out.

Here’s your guide on how to tell if an email is fake.

Think about how many emails people send through the course of one day, or even in one hour. Some estimates suggest more than 300 billion emails were sent per day in 2021, so if we do the math, that’s roughly … a lot of emails sent per year. And if, as a 2018 study found, one in every 101 emails is fake, a malicious message meant to dupe users into exposing their information in one way or another, that means a lot of emails are fakes. The good news is a keen eye can typically tell right away that something is off. Here are a few ways to scrutinize fake emails: 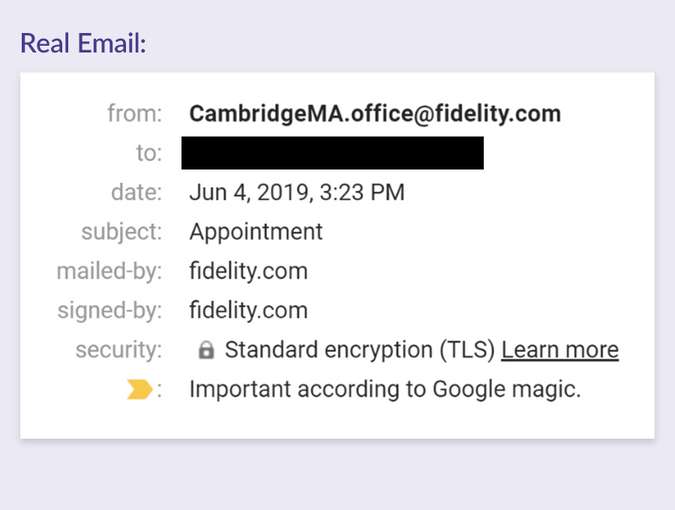 Email isn’t from the company domain

If the message comes from a company or someone claiming to represent a company, and the email address doesn’t match that company’s domain, that’s a major red flag. Your doctor’s office or local mechanic probably isn’t going to email you from an AOL or Yahoo account.

You can detect the red flags rather easily. Email users can hover their cursor over the sender’s name, which should reveal their email address.

Related: What are signs of email scams? This is a classic move by scammers, using a fake domain that is ever-so-slightly different from a normal domain. Think, for example, of someone using a capital “I” in place of a lowercase “i,” or a zero instead of the letter “O.”

Entire text of email is a hyperlink

We know, we know: Everyone has that crazy aunt or great uncle who sends you wild emails in all caps or with odd copied-and-pasted text or even as one big hyperlink. That is another huge red flag. Stop and think this through: Does anyone else you know send an email with the entire body hyperlinked? Didn’t think so.

Hover over the “from” section of the email

To detect the domain of the sender when you receive a bizarre email from an unusual or new sender, put your cursor over the “from” portion of the message. Email carriers all have that function, which allows you to see where the email came from. The email address alone is typically a dead giveaway that it may be fake, but also consider the domain name. As mentioned above: Reputable companies won’t email you from popular personal email domains like Gmail or Hotmail.

Much like you can decipher which domain an email sender used, you can also hover over a link to see where it might lead. By placing your cursor over the link, your web browser will automatically show the link either on the bottom of your screen or as a pop-up. If anything looks even remotely suspicious, it probably is. Remember: Think before you click on any links or attachments.

Related: What is email spoofing?

One of the most common spam techniques is a message claiming to have dirt on you, your family or your business—or claiming to be reaching out to you as a last resort—and demanding or begging that you help them immediately. This again is a situation where you should stop and consider the situation: Can you think of anyone you know who would email you asking for urgent help? We didn’t think so.

Again, much of these tips involve common sense. If the email you received has weird-looking content or is choppy, with bad spelling and grammar, think carefully about it. Those are typically dead giveaways that it’s a fake.

Are the emails unsolicited or unexpected?

Not every email is expected, but that is usually the first filter of a real email versus a fake. If you didn’t expect the email or if you didn’t solicit that email, and the email offers something or asks for something, the odds are really high that you received a fake, nefarious email.

Telltale signs of a fake almost always include the traits listed above, from weird typos and bad grammar to outlandish demands and urgent cries for help. The best way to try and protect yourself against fake emails is to operate with common sense. Do your friends and family members typically email you personal information or make bizarre requests? Do you typically encounter emails from reputable companies that have multiple grammatical mistakes in them? The answer is almost always no. So, take time to evaluate each email before you click on hyperlinks or respond.

What Does a VPN Hide?

What Can Someone Do With Your IP Address?

Do Cell Phones Have IP Addresses? How to Find Them

How to Stop Someone from Accessing Your Phone Remotely

What Does a VPN Hide?

What Can Someone Do With Your IP Address?

Do Cell Phones Have IP Addresses? How to Find Them

How to Stop Someone from Accessing Your Phone Remotely

What Does No Caller ID Mean?

How to Send Password-Protected Email by Gmail, Outlook, iOS