How to Block a Number on iPhone

These days, incoming calls aren’t just from friends and family. Most of us can’t seem to escape an ever-growing network of tenacious telemarketers, robocall scammers, and other mysterious or unwanted calls that light up our phones.

Fortunately, you can learn how to block a number on iPhone, which can help reduce the volume of nuisance calls and texts you don’t want to receive.

How to block calls on iPhone

If you have a post-2013 device and you’re running iOS 7 or higher, follow these steps to block a number on your iPhone: 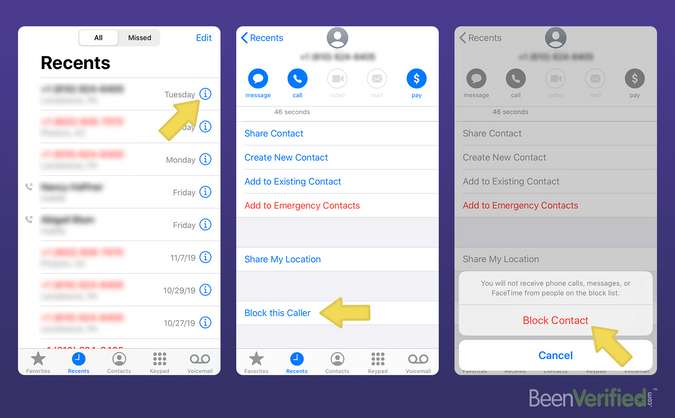 You know you’ve successfully blocked the call when you see the words “Unblock this Caller” at the bottom of the info screen.

If you want to know how to block a number on iPhone when the caller is one of your contacts, the process is even easier. Tap the “Contacts” icon from the phone menu, open the offender’s contact page and tap “Block this Caller” at the bottom of the screen.

Don’t worry, your contact won’t know they have been blocked; everything functions exactly the same on the caller’s end. Blocked calls automatically roll over to voicemail and are stored in a special voicemail folder for blocked calls. You don’t get a notification and you can delete them without ever listening to them.

Blocking is a one-way street, so you can still call or text blocked numbers without taking any additional steps or reversing the block. The blocked person won’t be able to call or text back. That’s a potential key feature if you ever need to get in touch with a blocked contact, but you’re not ready to restore the person’s calling and texting privileges.

Unfortunately, you can only block specific phone numbers using the steps above. If you’re plagued by blocked or restricted calls, you need to take a different approach.

In most cases, you have two options to block anonymous callers. Depending on your carrier, you may be able to activate anonymous call blocking through your account page or app or by contacting customer service. Both Verizon and AT&T offer this optional feature, although you may have to pay extra for it, depending on your plan.

The other option is to purchase or download a free call-blocking app. Most call-blocking apps maintain extensive databases of known spam numbers and automatically shut down incoming calls before they reach your phone. If your iPhone is constantly beset by robocalls and spam, call-blocking apps can dramatically reduce your daily interruptions.

Related: How to Block a Number on Android

By one estimate, 50% of cellphone calls will be spam in 2019. Learning how to block a number on iPhone can eliminate some of them, but it won’t solve the problem completely. Call blocking on iPhone will, however, put an end to unwanted calls from people on your contact list.

If you’re called persistently by a number you don’t recognize, a reverse phone lookup may help reveal useful information about the caller’s identity so you can take appropriate steps to put an end to these calls.

Want to Buy a Used iPhone? Here's What to Check

Your iPhone Is Sharing Your Info Without You Even Knowing It

What is Adware? How to Protect Against This Common Nuisance

Want to Buy a Used iPhone? Here's What to Check

Your iPhone Is Sharing Your Info Without You Even Knowing It

What is Adware? How to Protect Against This Common Nuisance

Who Is Your Textdoor or Number Neighbor? A New Viral Trend