What Is a Third Cousin?

Third cousin definition, and are they blood related 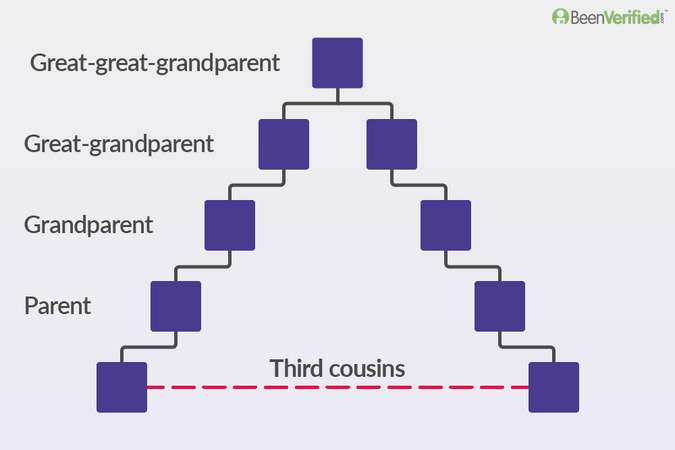 The genealogy site 23andMe.com lists a 90% probability that third cousins share DNA, though it’s a low figure. First cousins share, on average, roughly 12.5% of their DNA, said CeCe Moore, the chief genetic genealogist for Parabon Nanolabs. First cousins, once removed, share 6% on average, while second cousins share a shade more than 3%. Third cousins, Moore said, typically match less than 1% of DNA. The deeper into the family tree a relationship goes, the genetics two people might share match less and less.

If third cousins are related through great-great-grandparents, that means numerous new DNA sources enter the mix before reaching that fourth generation of relations. Great-grandparents add a whole new side of a family’s DNA to the equation. Grandparents bring in another family’s DNA. Parents do the same. By the fourth generation, scores of different genetic histories have worked together to distance third cousins quite a bit in DNA.

“(The cousin definition) really affects the amount of DNA you share,” Moore said. “Even though it’s simple, it’s very important if someone is going to do genetic ancestry.”

What is a first cousin?

This is straightforward: First cousins share grandparents. One cousin’s parent is a sibling of the other cousin’s parents. In other words, any child of your aunt or uncle is your first cousin.

This is where it’s important to note the correct label of cousins matters mostly for genealogical purposes. Culturally and socially, the “cousin” label could mean anything from an actual blood first cousin to a third cousin to a family friend and everywhere in between. “Cousin” can also be commonly used to describe relatives similar in age, even if one is actually the other’s aunt or uncle.

“People don’t use the terminology when they’re in family mode and obviously that’s perfectly fine,” Moore said, “but when you try to apply it to genealogy, it gets really important to make the distinction. It’s absolutely critical when you’re trying to understand the differences when you’re using the relationship for researching your family history.”

Related: Am I Related to Anyone Famous? A Quick Way to Research

What is a second cousin?

Counting by generations, second cousins go back three generations to find their primary relations. FamilySearch, an ancestry DNA site, suggests determining levels of cousin by following an equation: Count how many greats you need to find your common ancestor, then add one. If you share great-grandparents and add one, you get second cousins.

Learn more: How a Genealogist, DNA and BeenVerified Helped Solve a Family Mystery

What is a cousin “once removed”?

“It’s generational-based, not age-based, and that’s important,” Moore said. “You see that a lot, where the generation is off even when the age is the same. You can’t always go by ages because some families have huge age differences in siblings.”

How Much Is a Home DNA Test?

How Accurate Is an Ancestry DNA Match?

Am I Related to Anyone Famous? A Quick Way to Research

How a Genealogist, DNA and BeenVerified Helped Solve a Family Mystery

How Much Is a Home DNA Test?

How Accurate Is an Ancestry DNA Match?

Am I Related to Anyone Famous? A Quick Way to Research

How a Genealogist, DNA and BeenVerified Helped Solve a Family Mystery

Took a DNA Test? 4 Things You May Want to Do When You Get Your Results

Found Relatives On A DNA Test Site? What To Know Before You Meet Up