Sometimes, genetic genealogy test results don’t fit what you know about your family tree. Sometimes, surprising ethnicity results may suggest your parents aren’t who you think they are. Such was the case with Tom. With his permission, we share his story here.

At 70 years old, my wife figured I didn’t need another shirt for Christmas, so she bought me a DNA kit. I was in no hurry to send it in because I knew my ancestry. My mom was Irish on both sides and my paternal grandparents were Irish and German. I always considered myself Irish.

When I finally sent it in, the results showed I was largely Italian. I bought a DNA kit from a different company. These results came back exactly the same! I was troubled. My wife said, “At your age, why not just forget it?” But I couldn’t. I had to find out the truth. If these tests were correct, I had to find out who I am.

I did a Google search for “genealogy research companies.” After reading reviews, I hired Legacy Tree Genealogists. Their research showed the man who raised me was not my biological father. “These are your paternal grandparents who immigrated to the USA from Sicily,” the report said. One of their sons was my father.

When our researchers at Legacy Tree Genealogists reviewed Tom’s ethnicity results at several testing companies, we confirmed that while he did have some British and Irish ancestry, approximately half of his DNA was from southern Europe and North Africa—a profile typical of individuals with ancestry from southern Italy and other Mediterranean populations.

While genetic genealogy test results do provide ethnicity estimates, genetic testing databases may also include lists of genetic cousins whose relationships are much more useful for proving genealogical connections.

But Tom’s DNA match lists showed he also had close genetic cousins who descended from a family of Italian immigrants.

We found Tom had a close estimated first cousin, whose DNA suggested a 95% probability of a match. This person, however, had no published family tree or identifying details in connection with their DNA test profile. Using the unique username of this match, we performed a search on BeenVerified that revealed details of the person’s father, including his birthdate and death date.

We were able to use this information in conjunction with other genealogy research websites, and find how he was related to other genetic cousins. We identified Tom’s likely paternal grandparents: John S. and Grace L.

John and Grace were natives of Sicily who migrated to New York around the turn of the 20th century. After their marriage in 1903, they had 14 children, including eight sons. Additional exploration revealed that two of the older sons were living in the same city as Tom’s mother around the time of Tom’s birth, making them the most likely paternal candidates.

While both men are now deceased, their obituaries revealed they both had living descendants. Using the details reported for these descendants from the obituaries, we searched on BeenVerified and located contact information for Michael, a son of one brother, and Carla, a granddaughter of the other brother. Both individuals agreed to the test.

Several months ago, I received a phone call from my cousin Carla. Little did I know this would turn out to be one of the most important calls of my life. She told me about a call she had from a stranger by the name of Tom who discovered that the man he knew as “Dad” for 70 years was not his father.

At first, I was very upset and skeptical since my father was a prominent surgeon and family man. Could this be a scam? Then I thought that if this were me looking for my real father I would hope that someone would be kind enough to help. I was in my early 70s, and after much pondering and prayer, I decided to send in my DNA just as Carla had sent in hers.

Homing in on the results

Assuming that Tom was the biological son of one of these brothers, then there were two possible relationship scenarios with Michael and Carla:

Carla’s test results revealed she shared 838 centimorgans of DNA—a unit of measurement common in genetic research—with Tom. That suggested a 96% probability that she was a half-niece and only a 4% probability that she was a first cousin once removed. Michael’s test, however, showed he shared 1,987 centimorgans of DNA with Tom. This amount of shared DNA is only possible for half-sibling, uncle-nephew and grandparent-grandchild relationships.

Given the context, Michael’s test results clearly suggested he was Tom’s half brother, and Carla was a cousin once removed.

Michael’s story: ‘I Have a Brother!’

When my cousin Carla’s test results came back, it verified that she was a first cousin match to Tom. When I received my DNA results, it left no doubt… my DNA came back 100% proof that I had a brother Tom!

Tom and I started calling each other to try and find the connection between his mother and my father. Where did they live? What did his dad do? What was his mom like? We discovered that his mom and my mom were very social, usually the center of attention at parties, loved to dance and drink, and both were very attractive. Then Tom said his dad was in charge of the Convention Center in Atlantic City, New Jersey. Bingo!

My Uncle Lou was the World Bantamweight Champion in the late 1930s and early 1940s. The Convention Center in Atlantic City, which Tom’s father ran, was a common spot for East Coast boxing championships. My dad always went to his brother Lou’s championship fights. The world champion always sat at the dinner table with the big bosses of the convention center. So now we had the connection! This was real! 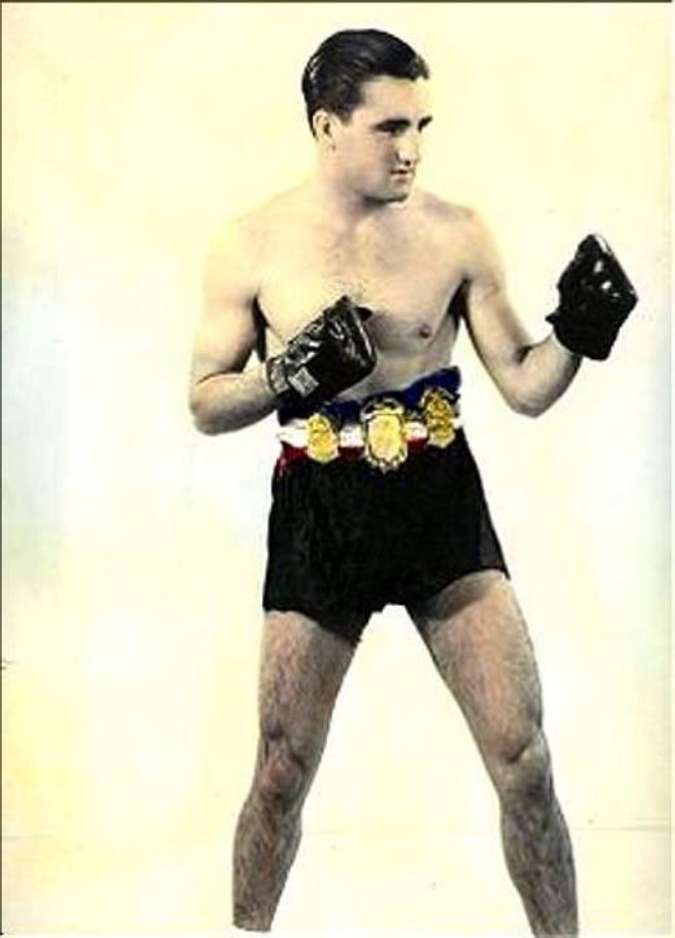 I sent Tom many photos of our dad and our family. We also described ourselves to each other. We have very similar likes and dislikes, same sense of humor, and the same religious and political views.

While sifting through photos, I came across our dad’s wedding picture that included his parents and siblings. There was an uncanny resemblance between Tom and our grandfather (pictured below). I sent the photo to Tom’s phone, called him and asked him to put his phone on speaker, go stand in front of a mirror and zoom in on our grandfather in the center of the photo.

When he did so, I heard Tom say, “Oh my God. I have found my family.” At that moment, two septuagenarian brothers broke down into tears. Through DNA testing, analysis of genetic cousins, contact with testing candidates and targeted testing of close relatives, we were able to determine the identity of Tom’s biological father. Throughout this process, BeenVerified was an important tool for identifying mysterious matches, extending the pedigrees of living individuals and locating contact information for targeted testing candidates and close biological families.

Do you have a genetic genealogy mystery you would like help resolving? Contact Legacy Tree Genealogists today. Our team is experienced at utilizing DNA evidence from all major testing companies in combination with thorough records research to break down the brick walls in your family tree.

How to Find Out If Someone Is On Tinder

How to Find Out If Someone Is On Tinder

When to Walk Away After Infidelity

Reconnecting With Old Friends: Tips on Rekindling That Relationship