Imposter scams are flourishing. Calls purporting to be from the Social Security Administration was the No. 1 threat of the past year. A similar imposter scam where fraudsters pretend to be from the IRS dropped to No. 3 last year, after topping the list each of the previous three years.

Meanwhile, the new year has seen an explosion in complaints related to a fake Walmart, Amazon and FedEx text message scam, which asks customers to fill out a short survey to unlock an expensive free gift.

BeenVerified’s Spam Call Complaint Monitor analyzed spam complaints from users who used our free reverse number lookup tool and opted to self-report details of unsolicited calls. Complaints were recorded from all 50 states and Washington, D.C., from Jan. 1, 2016, through Jan. 31, 2020.

“As the data is self-reported and volume of comments can ebb and flow, the Spam Call Complaint Monitor is more of a barometer showing which way the wind is blowing for phone-based scams,” said Justin Lavelle, spokesperson for BeenVerified. “As most reports don’t leave comments, the volume of scams are certainly much higher.”

Some spam calls may merely be a nuisance, like robocall offers from credit card and mortgage companies. A perennial way to entice callers to respond is to promise free trips or products. Consumers report being offered free iPhones, hotel stays, cruises, vacations, gift cards, government grants, and solar and security systems.

But other calls are from cybercriminals actively looking to defraud victims or steal their identities to set up fraudulent accounts in their name.

Our analysis found these were the top topics of call complaints among those who left comments: 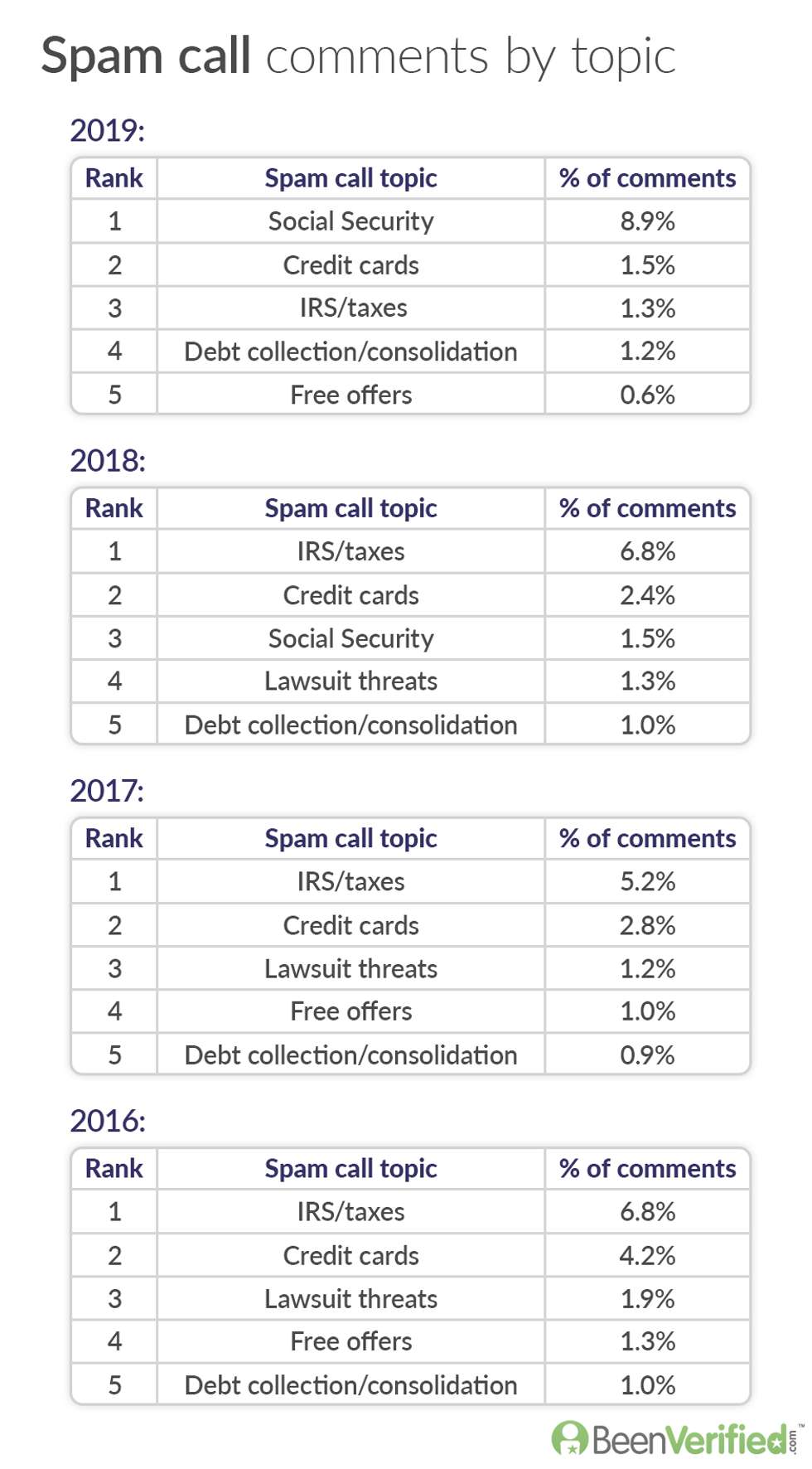 “As tax season heats up, we anticipate a seasonal rise in these imposter scams, as consumers are more likely to be thinking about tax and Social Security issues,” Lavelle said.

In the last month of 2019 into the new year, we saw a rise in a scam that leveraged the name recognition of three well-known brands—Walmart, Amazon and FedEx—to try to trick users into filling out a survey and earning an expensive free gift. The catch: To receive the “free gift,” users needed to provide a credit card number to pay for shipping.

“That’s where they get you—instead of being charged for only shipping and handling, your card is charged nearly $99 a month,” Lavelle said. 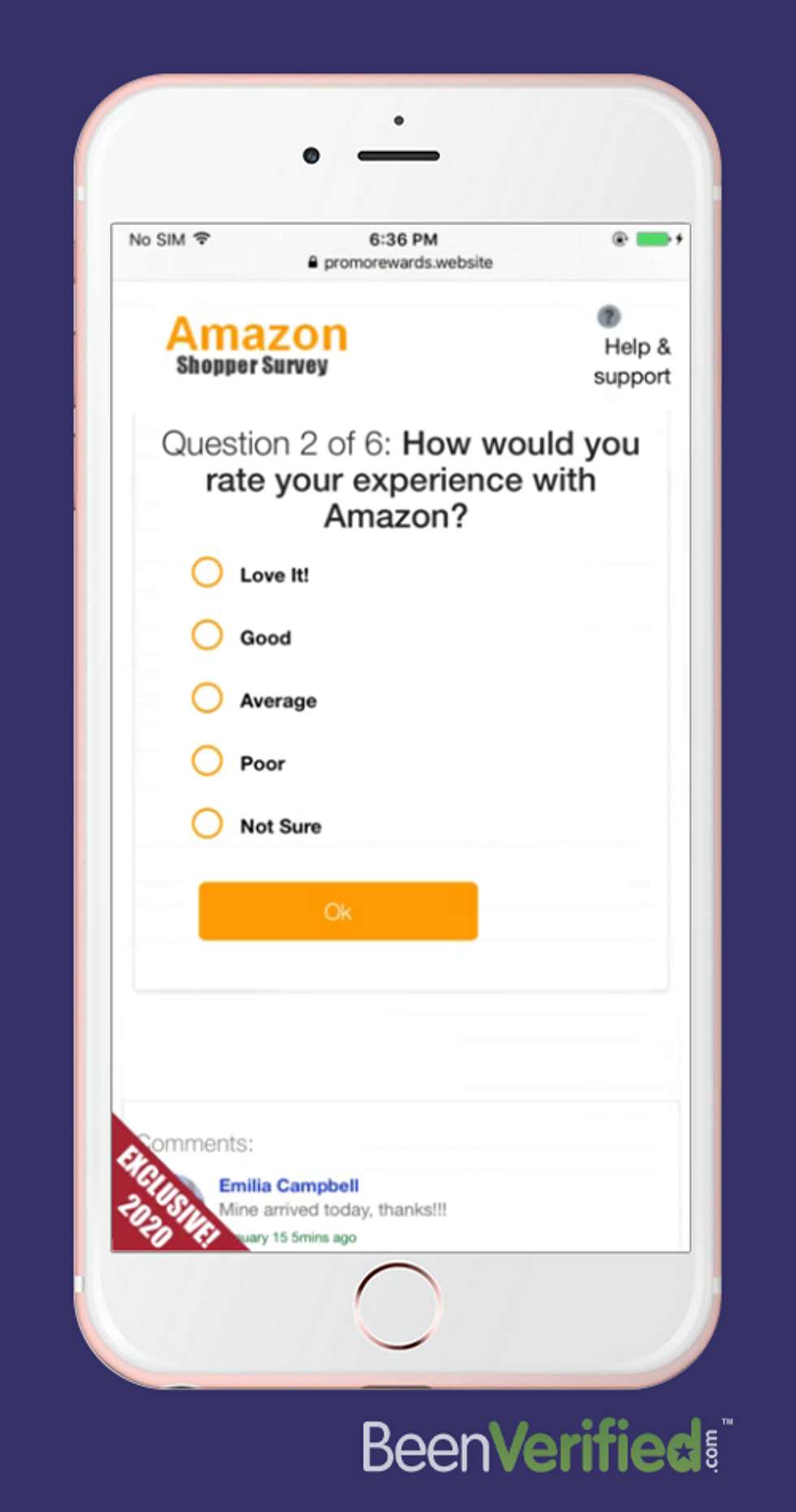 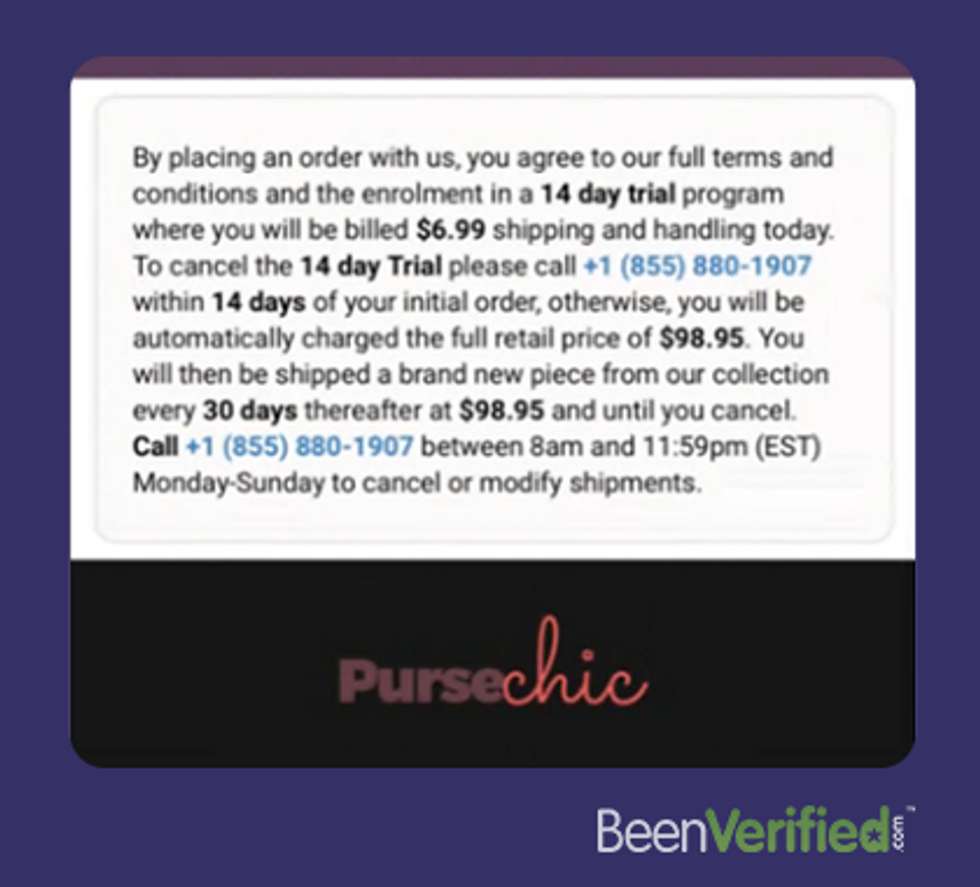 The fraudsters used the holiday season and New Year’s to try to entice users to click through:

“The December variant of the scam used Walmart receipts—as there was a higher likelihood during the Christmas shopping to land on a user who may have recently shopped at Walmart,” Lavelle said. Then in the early weeks of the new year, the scammers pivoted to “Amazon 2020 resolutions,” and finally made a big mid-January push claiming a FedEx package was on the way.

“In each of the scams, the link opens up to a fake Amazon survey,” Lavelle said.

Interestingly, when FedEx tweeted a warning about the scam on Jan. 22 (which was followed by a number of network news stories on the threat), the Spam Call Complaint Monitor shows the fraudsters dropped the FedEx variant of the con and pivoted back to Amazon and Walmart.

“It seems clear fraudsters watch the news, but they didn’t miss a beat—instead, they pivoted back to old tactics,” Lavelle said. “This illustrates how scammers are constantly on the move, creating a frustrating game of whack-a-mole for consumers.” While employing more sophisticated technology in their cons, such as text-based smishing campaigns and tech-support scams, fraudsters use principles of social engineering to ultimately reach their payday: harnessing human hopes and fears to prompt consumers to drop their guard and reveal compromising data.

Some recent examples from the Spam Call Complaint Monitor that illustrate common tactics include:

“I got this text saying my Netflix account is being canceled for nonpayment. I don’t have Netflix and I didn’t click on the link.”

“Claims I owe an unpaid balance on my Chase credit card. He does not know I do not have and never have had a Chase (or a JPMorgan Chase) credit card.”

“I’ve had between six and 10 missed calls from this number. In a sexy robot voice, they leave a voicemail with their phone number and a request to call them back.”

“Hey Jon, this is Ash from New Jersey. We talked the last time I came to St. George to visit my sister but we never actually met. I’m back in this area again til Sunday night if you wanted to get together?”

“Demanded immediate payment of some alleged debt or he would send the police to arrest me. Became loud and verbally abusive.”

“They called my job telling me I will be served legal papers today!” wrote another user. “The local police said it was a scam!”

“This is a very evil and crazy scam artist who threatens to kill and harm targets and their families. The message includes photos of dismembered bodies and threatens to do the same to the target if money is not sent ($1,500).”

“Got a text saying he was Juan Ricardo Machena from the Zetas cartel threatening to cut my head off along with my family. Wants me to pay a fine and then proceeded to send bloody images of dead people. Texted me from a 732 area code.”

“The most important thing for people to know about social engineering is that no hardware or software can completely protect you,” Mason Wilder, research specialist at the Association of Certified Fraud Examiners, recently told BeenVerified. “These attacks succeed because they target human vulnerabilities rather than systems or networks.”

Try and protect yourself from phone scams

Some important points to remember if you are targeted by Social Security or IRS scam calls:

BeenVerified’s mission is to help people discover, understand and use public data in their everyday lives. BeenVerified and our associated websites curate dozens of public data sources and proprietary data sets to give people easy and affordable access to billions of public records.

Always be in the know

The Best Call Blocking Apps for Your Smartphone 2020

The Best Call Blocking Apps for Your Smartphone 2020