Catalytic converter thieves have been on a tear since 2020, as police departments nationwide and car insurance companies reported a record surge of criminals stealing the part, which is laden with precious metals that help clean car exhaust.

An analysis by BeenVerified found thefts through 2021 more than quadrupled all catalytic converter thefts in 2020—and the trend shows no signs of slowing down this year.

Catalytic converter thefts from January through April are up more than 33% compared to the same time period in 2021, BeenVerified estimates. Several new hotspots for theft have emerged this year, including Hawaii, Indiana and Georgia.

Looking at the number of reported thefts in 2019 and 2020, BeenVerified compared state and national statistics of associated Google searches on “catalytic converter theft” during the same time frame and found that search traffic on the term reliably follows a pattern: For every 10 searches, there is on average one reported catalytic converter theft. 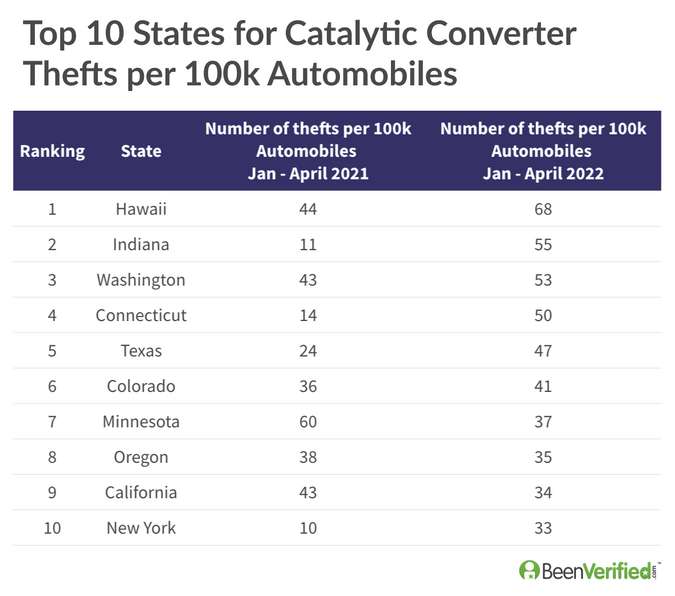 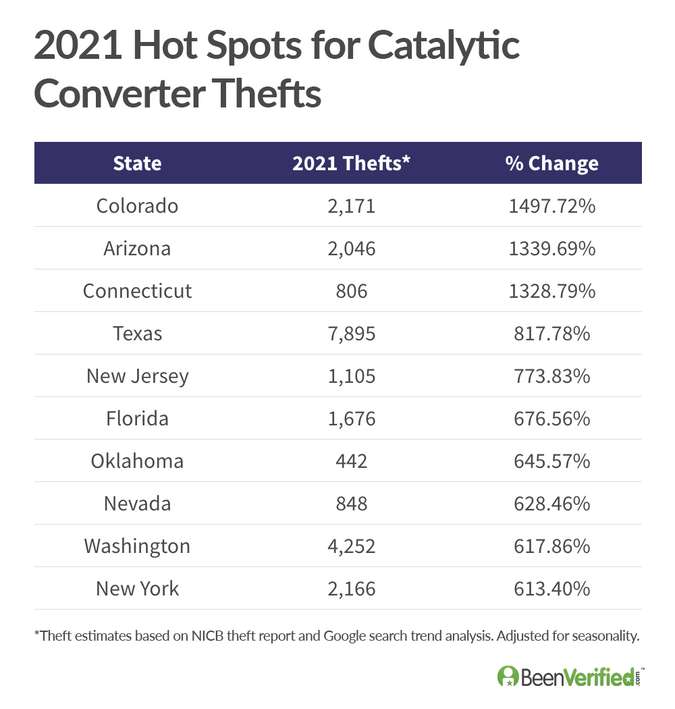 Catalytic converters contain platinum, palladium or rhodium, precious metals that have seen their value skyrocket over the past two years. The theft of a catalytic converter can be done in minutes by culprits, who then resell to recyclers for between $50 and $250 per part. The cost to repair is between $1,000 and $3,000, according to the National Insurance Crime Bureau.

Suggestions from experts to try and deter catalytic converter theft include:

BeenVerified analyzed 2019 and 2020 insured catalytic converter theft data from the National Insurance Crime Bureau and January 2019 through April 2022 search data from Google to make its findings. We found searches and thefts have a strong positive correlation (r(22)=.98, p < .01). Theft numbers for insured thefts are likely much lower than the total number of thefts.

BeenVerified’s mission is to help people discover, understand and use public data in their everyday lives. BeenVerified and our associated websites curate dozens of public data sources and proprietary data sets to give people easy and affordable access to billions of public records, including a VIN number lookup tool to research vehicle history.

Where the 'Karens' Are: California, New York Top States for Viral Incidents